Good lord I now have to write the dam thing! I guess I should start with a little background, when I first came to the States almost 30 years ago, Yikes! I had planned to drive across America, somehow life got in the way, but now my kids are grown and starting with their lives its time to get back to ‘the plan’. I started looking at RV’s and then the van idea came about, to change that into my own travel home on wheels, I have to admit this plan was a plan for the best part of 5 years, then I had the thought of using a bus as my canvas as it had windows and some width and height, also there would be more buses for sale than used vans. I planned my layouts without having the right bus in hand, but I wanted a small bus as its only going to be me and my dog Lucy. Now Lucy is a big part of this bus fantasy as my co-pilot. Lucy is my 10 year old Jack Russell and my buddy. So I found a great bus, a little larger than I had planned as I had thought of the smallest bus they make so I could park in a normal spot, but this bus is in great shape and with very low mileage. Its a 2000 Chevy with a Midbus body, yep they have lots of different body types! who knew.. this baby has only 42,000 miles on her and her body is in good shape. I have managed to get the seats out which has proved to be the pain in the butt job I thought it would be, but with a grinder and some socket wrenches I got all 10 plus the crash pad walls that where in front of all the seats. I need to get it painted as my neighbors are great people but who wants to look at a faded old yellow bus. I hope to be able to paint it this coming weekend, had planned on a two tone VW van like paint job, with a nice blue or green but Rustoleum at the stores I’ve been too have limited colors and the auto stores I’ve called don’t carry paint. I’m going to post a couple of photos of the bus when I bought it and will update as I go. Lucy was a little wet from the heavy rain today but let me photograph her for this first post. 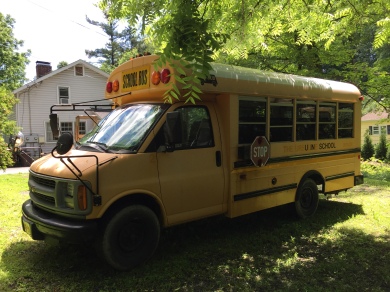 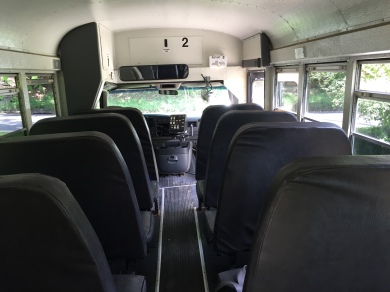 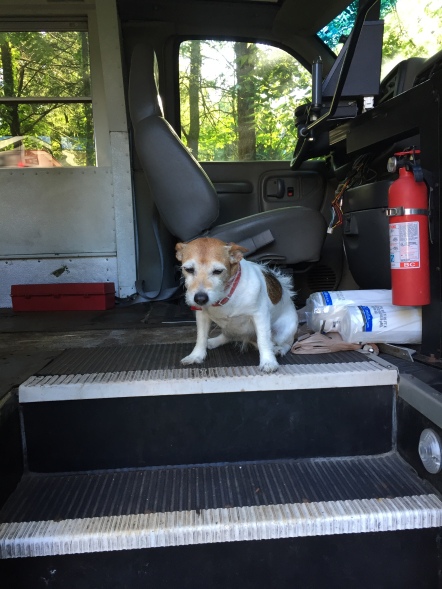 So I have just about got the bus to the point I can use it.  The last few weekends I managed to get doors on my cabinets, slide out bed made, counter top fitted, sink cut out done and sink partly plumbed and resting in place, hardware on just about everything, made a shower rod out of 1/2 pvc,  some makeshift curtains which I will sew at a later time so they look normal, I’m not a full 100% but once I got the bed in and something of a counter top it was time for a test run. I had a party to attend so parked at the party and brought my dog Lucy along for her first test run. Its was nice not to have to worry about a drive home on a rainy night and to be able to have a couple of pops. It rained through the night and I enjoyed the sound of the rain, both Lucy and I slept well and the bed was comfortable. I was not able to make coffee or heat water for a shower in the morning as the gas tank I just bought at Target has either expired or was used and returned empty. The following day I lost power at home so I was also able to test the heater I bought, the shower and able to charge from my solar set up, so pretty happy with what I have bought so far. If the weather holds out I will start on some painting and other finishes. I had to focus on the house /yard and putting away hoses and getting ready for cold weather, also the house needed some love as the bus has had all of mine for a while. 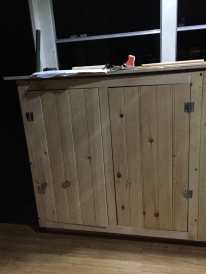 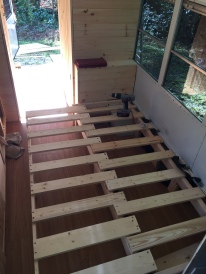 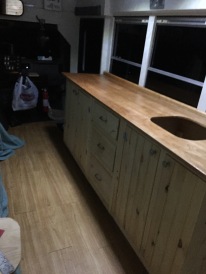 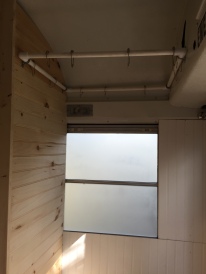 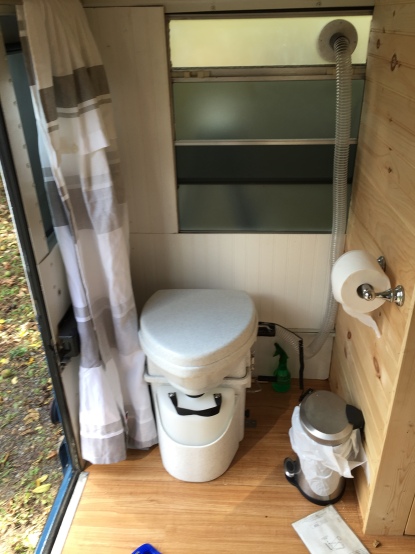 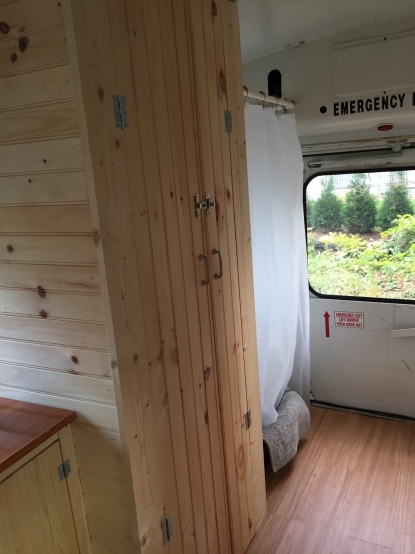 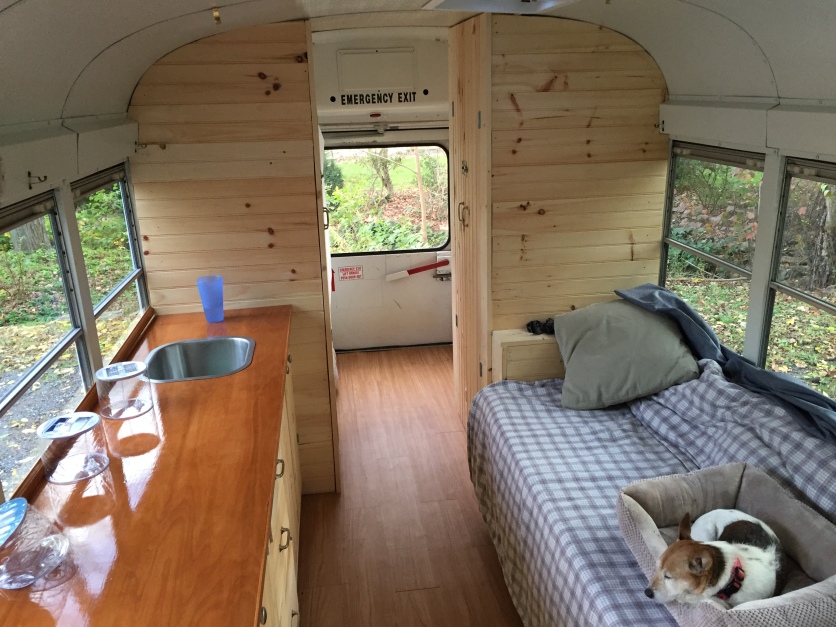 The last two weekends where commitment free so I was able to get a good deal done, plus the weather helped!. I was able to finish off the storage areas, add doors, two that double as a crude bathroom door. I have no real experience with carpentry and they leave a lot to be desired, but on the whole things seem to be shaping up. My first attempt at draws was ok, I need to make adjustments and do some fitting before I’ll be happy with them. If I find some time this coming weekend I will work on the cabinet door fronts, but I have plans with my daughters. Time to start planning the bed layout. Have also been thinking about the plumbing and debating p-trap v Hepvo valve, and grey water tanks, not to mention fresh water tank location. Lots to keep my mind busy. 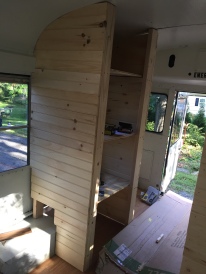 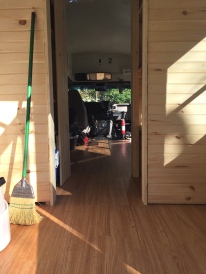 View from back of the bus 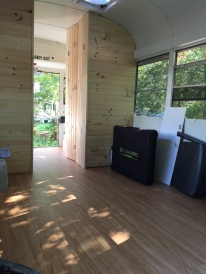 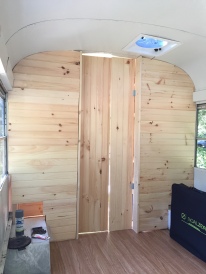 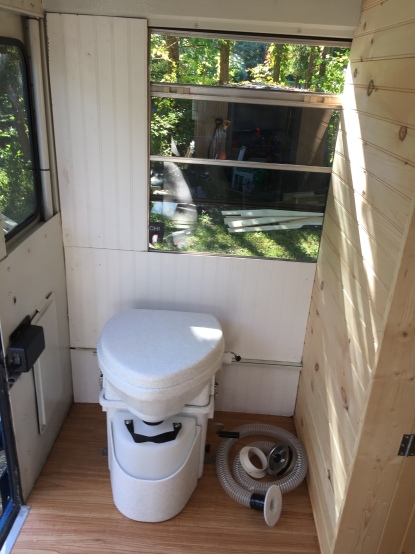 Loo in, need to vent and plug in 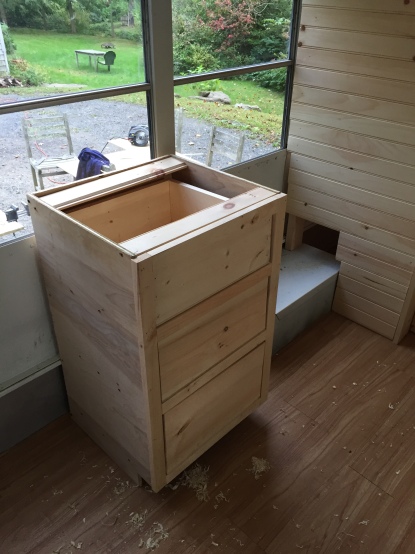 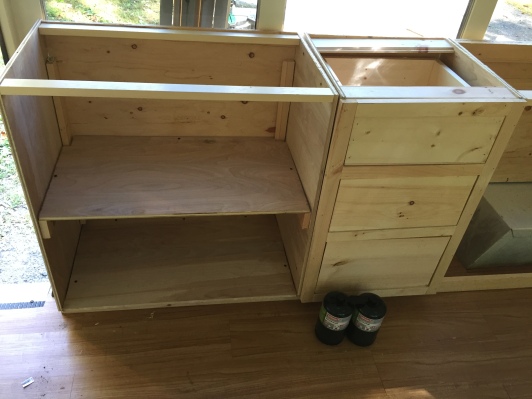 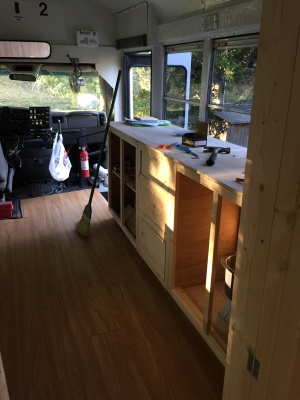 Ok so I’ve been busy with all that summer brings and working on the bus, given the choice to update the blog or work on the bus, well the bus wins every time. I have managed to get a good deal done but still enjoy my summer, but my mind is often filled with plans and what will be tackled next. I’ve so far managed to do most of the bus on my own, pushing through my comfort zone and admitting I don’t know what I am doing. But its my bus so sod it. I’ve had a little muscle help from the kid next door who was hoping to learn from my mistakes! Not sure how much he has learned. But a good deal of the stuff I am doing is solo and to date I’m pretty pleased with what I’ve got done. Brief recap. Seats out, bus painted, removed all parts like AC and heater that doesn’t work and put down a new floor, added a ceiling fan and started on the storage areas that will also be my walls. Hard to level anything when the bus is not on level ground, so I’ve measured but done a good deal of eye balling, might regret that! Hope to get more done this weekend and before weather gets too cold. 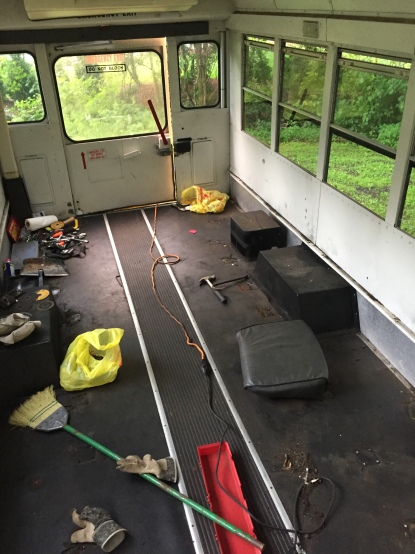 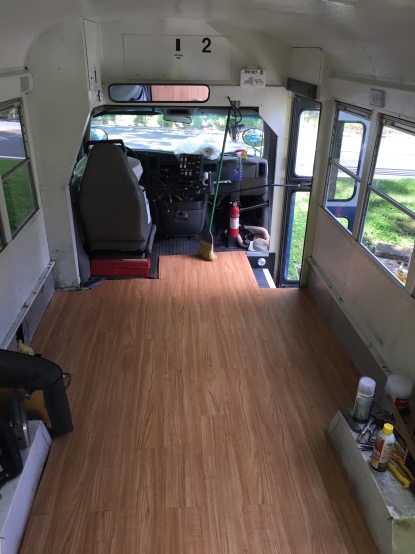 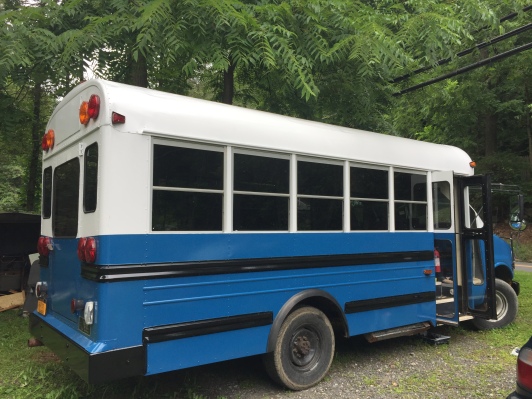 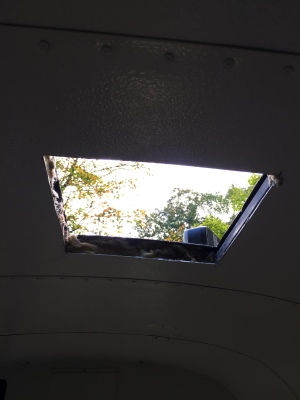 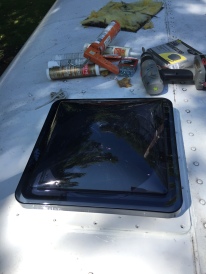 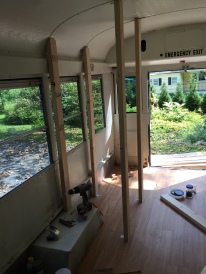 Start of the framing for storage area 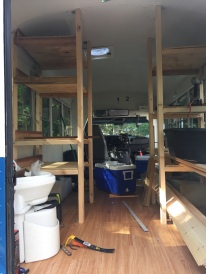 Both side framed and shelves in 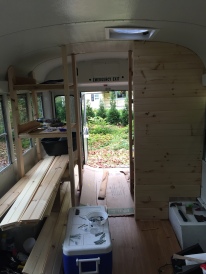